Don’t worry, this isn’t some awkward transition into some new medical marijuana or psilocybin startup. I mean this very literally. How do we know what’s real?

That’s a question that’s going to get even more complicated when the “metaverse” takes off… and the metaverse is core to Facebook’s (FB) future plans.

And Facebook just shrugged off some damaging headlines to report better than expected third quarter earnings.

If you were following the news, you were probably expecting catastrophe for FB… but it gained both during the trading day and after-hours yesterday.

Let’s bring this question of reality even more down to earth. How do we determine value?

The whole point of the stock market, or markets generally, is to determine value so scarce resources can be directed towards satisfying people’s wants and needs.

That’s key… it’s something that’s determined subjectively. This can create a kind of funhouse effect when it comes to stock prices.

When you look at the stock market, especially “meme stocks” whose prices don’t seem to match reality, rethink how you look at reality.

Even if investors are “irrationally” sticking with “meme stocks” like GameStop (GME) or AMC (AMC), their thoughts and actions are creating an objective new reality that we all have to deal with.

Of course, in the long run, fundamentals ultimately tell. You can’t keep an artificial illusion sustained forever. (Just ask the people who were involved in Enron or Theranos.)

But don’t ever underestimate the role of psychology in determining markets. After all, markets aren’t just about numbers and formulas.

They are about people – the wants and needs of everyday human beings. Perhaps most of all, markets are fundamentally about our dreams.

Now let’s get out there and realize ours. 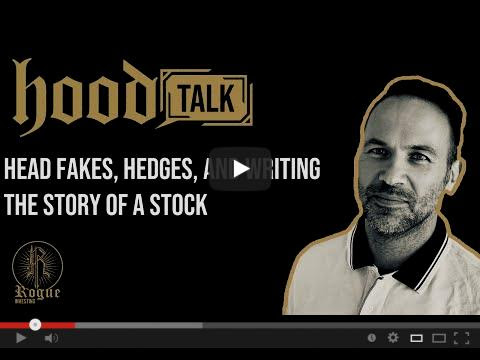 In this episode Chris continues with his analysis of market conditions that are likely unfamiliar to most traders with less than 3 years of experience.

Let Chris help you take the guesswork out of your options trading with his clear explanations backed by 20 years of market experience.

Click Here to Watch Episode 44: “Head Fakes, Hedges, and Writing the Story of a Stock“

Did you miss Options Coach Chris Hood’s landmark event? Chris does a deep dive into his cornerstone strategy that has been paying him every week for years…

EVERY WEEK, TRADE AFTER TRADE, WIN AFTER WIN

“There’s also one pattern that I’m seeing repeatedly. When a “meme stock” takes off, it may retreat later… but it usually finds support at a much higher level than where it began.”

DWAC? PHUN? What? Few investment professionals had heard of these fringe companies before last week, let alone seeing them as investment targets.

However, because of their association with former president Donald Trump, these two stocks delivered huge short-term returns. Will they maintain their position like AMC and GameStop (GME) have been able to do? Mr. X breaks down the new trading environment.. and why you can learn to love the meme stocks.

Missing the daily trade insights from Before the Bell? No worries!

Corey is still providing these ideas through his daily newsletter where he provides in-depth technical analysis into some of the biggest opportunities in the market. And it costs you nothing.

There is a very high degree of risk involved in trading. Past results are not indicative of future returns. Rogue Investing.com and all individuals affiliated with this site assume no responsibilities for your trading and investment results. The indicators, strategies, columns, articles and all other features are for educational purposes only and should not be construed as investment advice.

Information for any trading observations are obtained from sources believed to be reliable, but we do not warrant its completeness or accuracy, or warrant any results from the use of the information. Your use of the trading observations is entirely at your own risk and it is your sole responsibility to evaluate the accuracy, completeness and usefulness of the information. By downloading this book your information may be shared with our educational partners. You must assess the risk of any trade with your broker and make your own independent decisions regarding any securities mentioned herein.

Affiliates of Rogue Investing.com may have a position or effect transactions in the securities described herein (or options thereon) and/or otherwise employ trading strategies that may be consistent or inconsistent with the provided strategies. An InvestPub Company.

HIGH RISK WARNING Trading foreign exchange, stocks, options, or futures on margin carries a high level of risk, and may not be suitable for all investors. Before deciding to trade, you should carefully consider your objectives, financial situation, needs and level of experience. RogueInvesting.com provides general advice that does not take into account your objectives, financial situation or needs. The content of this website must not be construed as personal advice. The possibility exists that you could sustain a loss in excess of your deposited funds and therefore, you should not speculate with capital that you cannot afford to lose. You should be aware of all the risks associated with trading on margin.You should seek advice from an independent financial advisor. Past performance is not necessarily indicative of future success.