When you get something right, it’s hard to resist the temptation to bring it up again.

I got it right on Roblox [RBLX] even before it went public, calling it “the next gaming titan.” If you purchased Roblox at its IPO, or even if you got in as late as the first week of this month, you’re almost certainly in a positive position. This even includes the almost 11% decline on Monday, November 22. 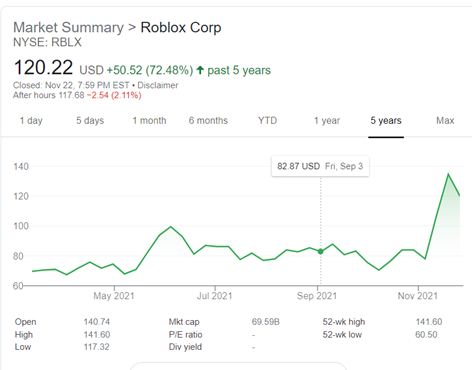 Writing back in November 2020, my view of Roblox was fundamentally of a platform and a gaming company. There’s one crucial word that wasn’t mentioned at all… and that word was metaverse.

In the months since, we’ve seen Facebook change its very name to Meta [FB]. We’ve seen Nvidia [NVDA] surge as the concept becomes something tangible.

CEO Jensen Huang appeared on Jim Cramer’s “Mad Money” last week to speak about his vision for the metaverse, and he was practically bursting with enthusiasm over its possibilities. He argued that humanity wastes a tremendous amount of resources because we don’t “simulate” all that we could, essentially wasting energy and time. The metaverse allows us to model things that we can’t easily replicate in the real world. Ultimately, he said that the metaverse and artificial intelligence could save “hopefully hundreds and hundreds and hundreds of billions of dollars.”

NVDA recently reported better than expected quarterly earnings and revenue. Subscribers to Dr. Kent Moors’s Prism Profits are enjoying a return of just under 100% since receiving a trade alert in April. That even includes Monday’s decline, which hit most of the tech-heavy NASDAQ.

NVDA’s stock price is increasing so rapidly that I could easily imagine it reaching the price it commanded before it executed a 1:4 stock split.

A $40 Trillion Mega-Wave is shifting the global economy…

Changing everything from the clothes we wear to the cars we drive. It’s recently produced a 500% windfall in only 30 days.

The metaverse is as big as “clean energy,” “electric vehicles,” or the “Internet of Things.” It’s arguably bigger than all of those things. It represents a new way of experiencing entertainment, commerce, culture, and life itself.

It also promises to smooth off some of the hard edges of the atomized, deracinated “Streaming Society” that many of us have been forced into during the COVID-19 pandemic. We’ve been trapped into viewing reality on a screen. In the metaverse, if you are inside the Internet, experiencing it, it may seem less alienating.

While Mr. Huang spoke about the savings that could potentially be realized, there’s also a tremendous amount of spending and investment that will be unlocked. Power generation, semiconductors, cryptocurrency, blockchains, cybersecurity, cooling systems, and a host of other entire sectors will be subsumed beneath this monster that we call the metaverse. Again, the change will be bigger than the Internet itself.

Of course, this may also seem bizarre and weird, even terrifying. Tesla [TSLA] Tecnoking Elon Musk joined many people in mocking Mark Zuckerberg’s rather off-putting video about the metaverse when the Facebook founder announced the name change. 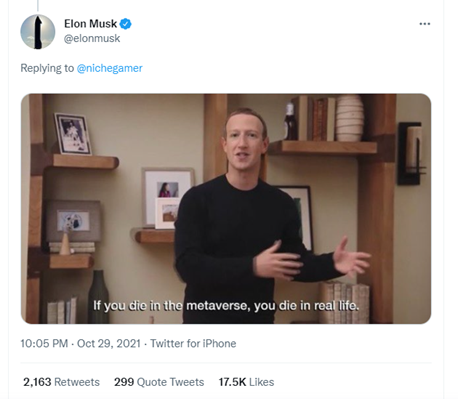 Still, it’s almost impossible to talk about the metaverse without alluding to dystopian scenarios or sci-fi movies with bad CGI from the 1990s. If you’ve ever used Oculus or another virtual reality system, you know that the feeling of being “immersed” only goes so far. You never quite break that feeling of just having a helmet on.

As far as a device that lets you operate in the real world seamlessly, there are still major obstacles to “smart glasses” that will let people experience “augmented reality” without looking ridiculous. Glasses that are light, cheap, functional, and don’t run out of battery quickly are still a pipe dream. The lingering problems with the supply chain, especially when it comes to semiconductors, ensure that developing true augmented reality will take a while.

Obviously, Meta and Big Tech more broadly are throwing everything at the metaverse concept. Investors should be looking for companies that can bridge the gaps between fantasy and reality. That will certainly be my focus over the next year.

At the same time, we must consider where we are now… and that means a fresh look at RBLX at its current price.

Roblox recently reported bookings, daily active users, and time spent on the platform by those users were all higher than many analysts expected. This was quickly followed by Nike’s [NKE] “Nikeland” on Roblox, a series of games also allows the apparel company to advertise to users as they are playing.

Consider what Apple [AAPL] has been able to secure in terms of revenue by controlling the App Store – and the legal battle it is fighting with Epic Games and others to maintain control. The potential for Roblox is what got investors so excited last week and led to the stock’s massive jump to over $120 a share.

However, though Roblox [RBLX] is in the RID Model Portfolio and I believe in the stock for the long-term, people need to take off the virtual reality googles and consider the real world. RBLX is many things, but few would call it truly “immersive.” Its graphics are clunky in a Minecraft style of way. That’s not without a certain charm, but you never lose sight that you are playing a game or that a “shared experience” like virtual concert is on a screen.

Roblox isn’t even close to the “uncanny valley” problem where people feel disgust towards something that looks almost human. Solving that will be a giant hurdle in itself, unless the metaverse is to remain forever populated with avatars that harken back to the days of Super Mario Brothers.

The bigger problem is that of managing content. Why did Meta change its name from Facebook now? The leak of “The Facebook Papers” and the accompanying bad publicity may have been a factor.

The company was being heavily criticized not for being too censorious, but for not being censorious enough in curbing misinformation and extreme speech. Of course, extreme speech also drives engagement – and so FB doesn’t really have a solution to this problem.

Clear guidelines from the government about what is and is not allowed would help by taking the problem off the company’s hands. However, the First Amendment makes that almost impossible. The real rules people have to live with are arbitrary and almost random, which frustrates CEOs as much as it does consumers.

Roblox is going to suffer from the same dilemma that Facebook does. Currently, most of the user base is young. The company naturally wants to build on that – but most adults don’t want to be in a virtual space that bans romance, politics, or edgy banter. Roblox had to ban those things to prevent children from seeing things they shouldn’t… but that led to a decline in early October when investors thought the company was limiting its growth potential. The company also suffered from a catastrophic outage over Halloween, suggesting it may even have trouble handling its current user base.

One could argue that Roblox is preemptively avoiding the problems that bedeviled Facebook. It’s created a “safe space” for gaming, advertising, and perhaps business meetings. Yet that’s not really an augmented reality, nor something that many teenagers or adults may be interested in spending time in. It seems almost like work. Roblox may have to create several different self-contained universes – with heavy security in between – to allow both children and adults to take advantage of the platform.

More than any other company, Roblox probably can do this. It is the leading company in the metaverse sphere. Yet it is hard to see how the company will get from a “virtual space” to “augmented reality.” While Meta is far behind now, it is at least addressing how we will get there. Roblox is not.

What I see as the missing ingredient is a partnership between Roblox and one of Meta’s competitors. There’s a famous April Fool’s Day joke saying that Roblox and Google merged – they didn’t. However, something like that might be necessary. Roblox is in the perfect space right now, but the metaverse is what is going to be really changing people’s lives five years from now.

Even after its decline yesterday, Roblox may prove to be another triple digit winner for RID subscribes, as Lucid Group [LCID] was for us last week.

An Information Service That Takes You Inside the Corridors of Power

Short term, it has plenty of growth potential. Three years from now, I see major obstacles. The RID Model Portfolio will hold – but if you need cash in the short-term, taking profits now is not unreasonable. There are going to be more bumps in the road.

The best argument for sticking with the stock over the long-haul is faith in corporate leadership. They’ve managed to become an industry leader in a sector where Mark Zuckerberg is playing catchup. However, just like Meta has learned, power shifts quickly in the digital world.

If RBLX wants to remain the metaverse leader, it will only be able to rely on its existing model for another year or two. The metaverse is bigger than clunky avatars hawking shoes – and Roblox will need to show something new before its customer base simply grows out of its product.