The Next Debt Bubble

Sometimes we need to discuss some more involved market elements to understand what is really happening. Today is one of those days.

Crude oil prices have continued to advance. At the close of commodities trading on Friday (2:30 PM Eastern), the two main benchmark rates – West Texas Intermediate (WTI), the standard in New York, and Brent (the global yardstick set daily in London) – were both above $80 a barrel. WTI gained 1.32 percent for the week, Brent was up 1.25 percent.

As I have noted previously, the continuing rise in prices these days reflects as much an ongoing manipulation of oil trading as it does a movement in genuine fundamentals. But that game is an extended discussion for another time.

The rise would seem to be just what the smaller players in the US need. That picture is now better. But there is another shoe about to fall in the ongoing fight by those companies to survive. And it has less to do with price levels and more to do with how operations are financed.

There is a major energy debt bubble rapidly forming and it will put some significant pressure on the sector moving forward. Make no mistake, despite pricing reveries, there will be fewer oil producers in the US at the end of the year than there were at the beginning.

Now that is not necessarily a bad thing from our investment standpoint. Well-positioned and well-managed producers will be acquiring choice drilling assets and leases at discount and that will raise both their bottom lines and our profitability.

Yet the terrain is changing

The bout this week with rising bond yields has once again put added pressure on the Achilles heel of most small operators. Most American E&P (exportation and production) companies have been cash poor for some time, regardless of the price of oil.

Essentially, this means it has cost them more to fund ongoing operations than they have realized in revenues. When prices for oil have been high, this spread has made little difference. In such an environment, it is usually better to fund the bulk of forward operations out of rolling over debt than from tapping cash.

This is especially true if the company is publicly traded. In a higher (and stable oil pricing situation), cash proceeds translated into a higher offered dividend constitute a better return for the company’s share value than a rapid retirement of debt.

Yet this remains all about the price commanded for the commodity.

Remember, the price you see flashing as a bug in the corner of your TV screen is a futures contract price (actually the rate for next month deliveries). The company taking it out of the ground, however, makes a lower price.

The first pricing stage is at the wellhead. This comprises the transfer of oil coming out of the ground to a distributor (a wholesaler). That is what the operator realizes as revenue but it is hardly the final price. Rather, the price is then adjusted upward as it transits to a refinery (the primary end user of the raw material crude) and on as finished oil products to retail consumers.

Depending on the grade of oil produced (based on factors such as weight, sulfur content, and impurities), the producing company is making a lot less. At $80 a barrel for the final market price, the average U.S. producer is making somewhere around $55.

And that means even with overall prices improving, they are not rising fast enough to avoid an oncoming squeeze.

Energy debt is found at the upper end of the high yield debt curve. That is often referred to as junk bond territory – issuances below investment grade. Since this debt has a higher risk of default, it provides a lower face value and a higher interest rate.

That is simply a risk premium – the issuing company realizes lower funding and must pay more to receive it. To stay afloat, leveraged oil companies need to be able to: (1) roll existing debt over; and (2) access debt markets for additional funding.

Unfortunately, as we learned when oil prices retreated significantly several years ago, the yield curve exploded at the end used by oil companies. As junk bond yield rates increased, energy yields (at the top end of the “junk pile”) expanded even quicker. 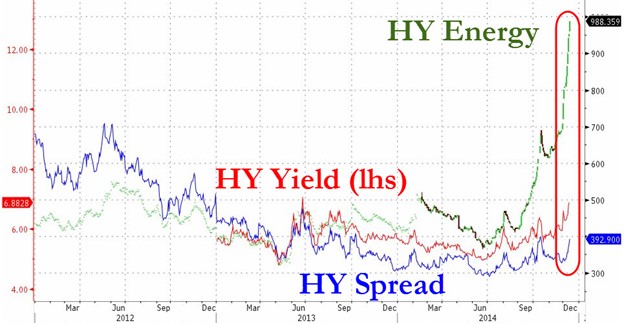 The current recovery in oil prices certainly has helped. Unfortunately, the rise in bond yield rates as analysts see inflation on the horizon has introduced a similar concern in energy debt. This time, it is not the wellhead revenues but the condition of the debt market itself that is causing the worry.

Currently, there is over $2 trillion of oil company junk bonds outstanding. And the interest commanded on new issuances is accelerating. As of last week, some of the most endangered oil company annualized interest rates were spiking well beyond the levels of investment grade debt. As bond interest rates in general were rising this week, energy bond rates were advancing even more quickly.

How quickly? Extremely aggregate figures are not always indicative of what is really happening in the debt market, except in this case. Bond interest rate changes are quoted in basis points. Each 1 percent revision is divided into 100 basis points. That allows us to calculate a convenient yardstick of how one particular component of the market is faring against a broader spectrum of debt.

My estimates as of close of trade on Thursday are indicating a significant bubble forming in indebted oil companies’ abilities to weather the debt storm. Each 1 basis point rise in investment grade debt yield has translated into a (quite generalized) rise of almost 2 basis points in junk bonds.

But the rise is almost twice that for energy junk bonds.

The conclusion is direct: high risk interest rates are almost doubling over safer bonds, while the energy portion of the junk market is experiencing a rise approaching four times safer debt.

Of course, much of this is a function of a massive re-pricing in global debt, at least some of this being a market deciding (not always for the best of reasons) to do the Fed’s job for them. The continuing acceleration in debt yields, therefore, is not likely to continue at such a pace for much longer.

But it has already done some significant damage to the most exposed oil producers.

To survive, companies need to hedge. That means they will take out futures contracts on their own forward production. But actual market prices for the product at contract expiration need to match the hedge (and the combined series of options companies will take on that contract). That is called arbitrage and it has been happening only with greater difficulty these days.

Within all of this the breakeven point for the cost of operations versus the market price of the oil produced must be at a level allowing for the debt load to remain manageable.

That is becoming more difficult. My current projections put the breakeven market price at about $74 a barrel for the bulk of shale and tight oil production in the US. This is the primary contributor to the new production surpluses experienced.

My expected market (not wellhead) price by the end of this year should come in at about $80 a barrel. Most companies will still be able to hedge forward for another eight to twelve months. However, that assumes debt costs (a major component of doing business for small companies) remain at the current higher level. Unfortunately, bond yields will be rising further, and the highest “junk” levels of high-yield bonds (those resorted to by oil producers) will be increasing at an even higher rate.

Then WTI market price would need to approach $100 a barrel by the end of this year (a very unlikely scenario even if the current under the table shenanigans accelerate) or the cost of hedging will become prohibitive and the range unpredictable.

There will be casualties well before we reach December. Expect a rising bankruptcy rate and a robust mergers and acquisitions (M&A) cycle kicking in by summer.

That cycle will also provide us with some nice opportunities to make profits from the energy debt bubble.