As I write this, it is approaching 3 AM here in Switzerland, six hours later than the time on the American east coast. The jet lag will shortly kick in but there will be little down time this week. This is shaping up as another delicate series of meetings. The first wave is scheduled for this morning.

Upon reaching Geneva yesterday (Sunday), I received a grim reminder that there is a serious resurgence of the COVID-19 pandemic underway in Europe. Swiss numbers are spiking to levels that already are worse than those witnessed earlier in the year. This is due in no small measure to the explosion in cases just across the border in France.

My Swiss sessions are in Lausanne. It is close by the French border and some fifty miles up the north coast of Lake Geneva from the private airport where we landed. The French crisis has even led to a partial suspension of the famous and picturesque ferryboat service across the water. 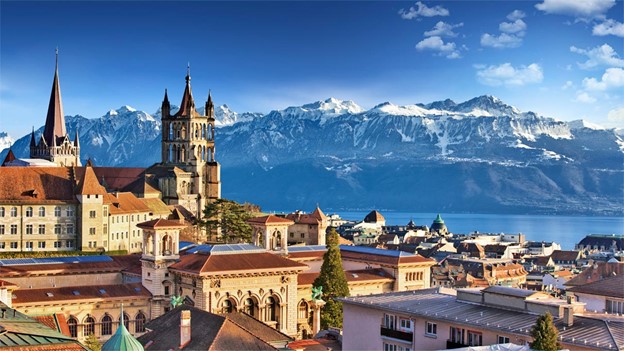 We are taking great pains to insulate. The meetings will be split between two limited access locations. The first is within the Lausanne Palace, my historic hotel base overlooking the Lake from a high point in the city center. 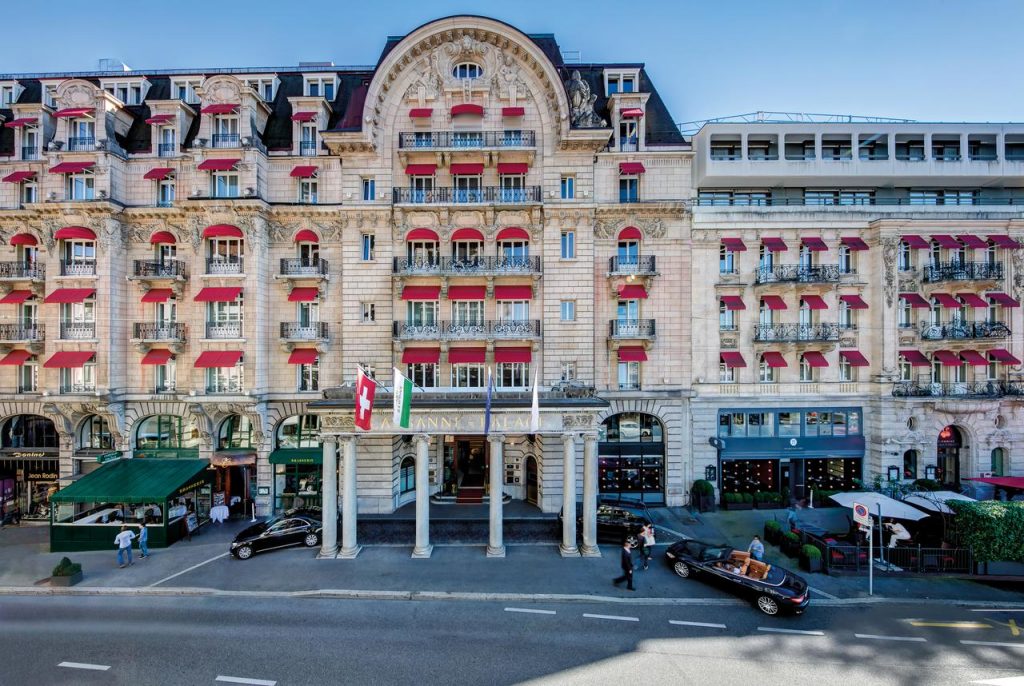 The second is the headquarters of Naftiran Trade (NICO) in the Lausanne suburb of Pully. NICO is the principal location for Iranian oil and related sales internationally. I have been there on other occasions. It remains one of the easier locations to meet Iranian energy officials outside the Persian Gulf. Hence the choice of Lausanne for these talks.

On this occasion, however, factors have collided to increase the stakes even further. The volatility expected from the fast approaching US elections hardly helps. The narrow window to create a positive political environment so the region can export oil without interruption is closing.

COVID has placed both meeting locations under highly restricted protocols. All participants and support staff are subject to twice-daily testing. For some reason, the Swiss have easy access to the latest fast and highly accurate tests for which there is still limited availability in the US.

Unfortunately, that may be the sole positive note as we move into the talks. The “two location” format is dictated by a necessary bit of consensus building. Before I meet with the Iranian representatives at NICO the other parties need to have come up with a realistic approach. They must have extended sufficient olive branches toward Tehran to attract any interest.

However, throughout it all – both here in Lausanne and later this week in the United Arab Emirates’ capital of Abu Dhabi, I must remember my place. I am essentially serving as a go-between because of the people I know on both sides. In fact, finance folks on one side and oil folks on the other requested I serve in this role.

Yet I am not here as a government representative, I have no public position from which to offer any official policy recommendations, and find flexibility limited by those all-encompassing US elections. In other words, I have no diplomatic status (or protection) whatsoever.

Hardly the first time I have been a NOC (having “no official cover’) in a dicey situation. But those other stories are for other times.

Initially, an already fluid meeting agenda will again be revised to increase the chances of delivering a positive outcome. For the next week or so (the duration remains open), sessions in several locations will center on fashioning a joint response to push “up the food chain” to decision makers.

Much easier said than done.

As I await the first session, the situation is deteriorating more rapidly than anticipated. While still over the Atlantic, my discussions took on some added urgency. Iranian contacts have been telling me for a while that additional military options are under consideration in Teheran. It worsened further before I landed.

Confirmation was provided by several sources yesterday (Sunday) that additional Iranian pressure is increasing on oil trade in the Persian Gulf. I anticipate clarification in the next day or so from direct conduits to the leadership in Tehran.

Assuming, of course, they choose to tell me anything at all.

The newest wrinkle is this. Some close to the Iranian Supreme Religious Leader Ayatollah Ali Khamenei have concluded any rapprochement with the US is a waste of time. While some advising the still reform-oriented President Hassan Rouhani believe a relaxation in the American approach may be coming after the US November elections, more militant leadership, especially in the Iranian Revolutionary Guard Corps (IRGC), have concluded it makes no difference who occupies the White House come January 20.

They have decided Tehran must put pressure on US allies in the region now. That these individuals control both the Iranian military and the ear of the nation’s leader is disquieting.

Shipping traffic in and around the strategic Strait of Hormuz has noted increased activities by International Revolutionary Guard Corps Navy (IRGCN) forces. Two specific crafts are of special concern since they constitute the primary threat of a low intensity attack on tankers and related vessels. They are: 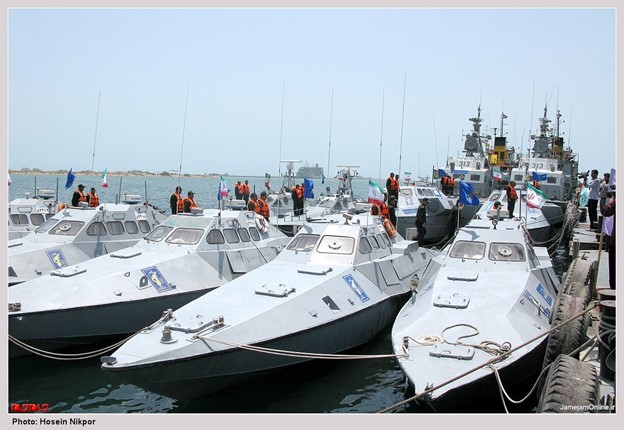 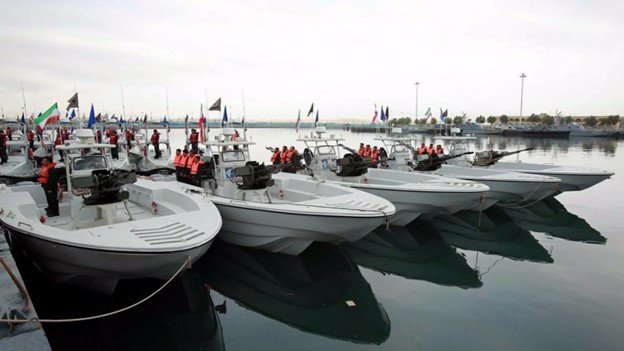 The IRGCN made a point in late May of announcing it had received an additional 112 attack boats to increase the existing fleet. All of these are for use in and around the narrow Strait. The boats have been harassing foreign shipping, including US naval ships, in the immediate area for several months.

The new crafts, with the latest versions named for assassinated General Qasem Soleimani, have expanded missile and mine launching capabilities.

The capacity to increase uncertainty has been enhanced in another way. In 2015, Iran downed a US Lockheed Martin RQ-170 Sentinel stealth drone with minimal damage. The shootdown occurred over the Iranian city of Kashmar, near the Afghan border. 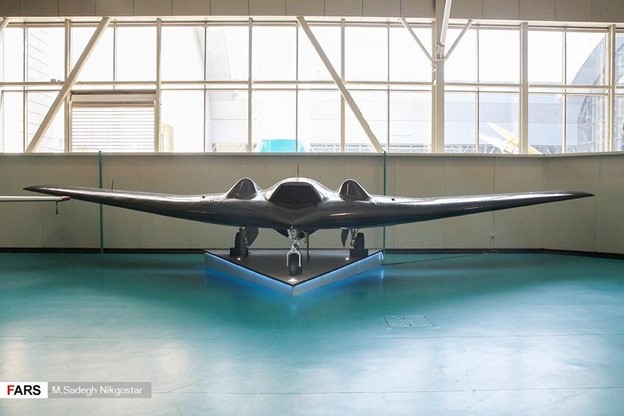 Over the next several years, Tehran reverse engineered a domestic version. The first generation of these drones has made it into the IRGC arsenal with 188 becoming operational in late September.

Now, one does not conduct a full military attack using only small craft and drones despite the damage each can inflict. Rather, these are examples of asymmetric warfare. This involves conflict between nations having vastly different levels of military power and tactics.

Absent a breakthrough agreement, most of my network now anticipates more Iranian usage of an asymmetric approach. The objective is not to defeat an adversary but to increase uncertainty.

Anticipating this, Washington had attempted to enlist regional nations to participate in a US-led convoying system to protect tankers moving toward and through the Strait of Hormuz. The initiative was a failure.

The uncertainty being introduced will lead to a rising instability in oil prices.

Iran has become adept at acting just below the threshold at which the US would be prepared (or able) to employ its full firepower.

It just so happens that I have had prior experience with how military and intelligence thresholds play out in policy.

As I move into the increasingly charged discussions here in Switzerland, I’ll have more to say about how it is paralleling an environment I have been in before.

We move there next time.

This is an installment of Classified Intelligence Brief, your guide to what’s really happening behind the headlines… and how to profit from it.

Dr. Kent Moors served the United States for 30 years as one of the most highly decorated intelligence operatives alive today (including THREE Presidential commendations). After moving through the inner circles of royalty, oligarchs, billionaires, and the uber-rich, he discovered some of the most important secrets regarding finance, geo-politics, and business. As a result, he built one of the most impressive rolodexes in the world. His insights and network of contacts took him from a Vietnam veteran to becoming one of the globe’s most sought after consultants, with clients including six of the largest energy companies and the United States government.

Now, Dr. Moors is sharing his proprietary research every week… knowledge filtered through his decades as an internationally recognized professor and scholar, intelligence operative, business consultant, investor, and geo-political “troubleshooter.”

This publication is designed to give you an insider’s view of what is really happening on the geo-political stage. You can sign up for FREE to Classified Intelligence Brief and begin receiving insights from Dr. Moors and his team immediately. 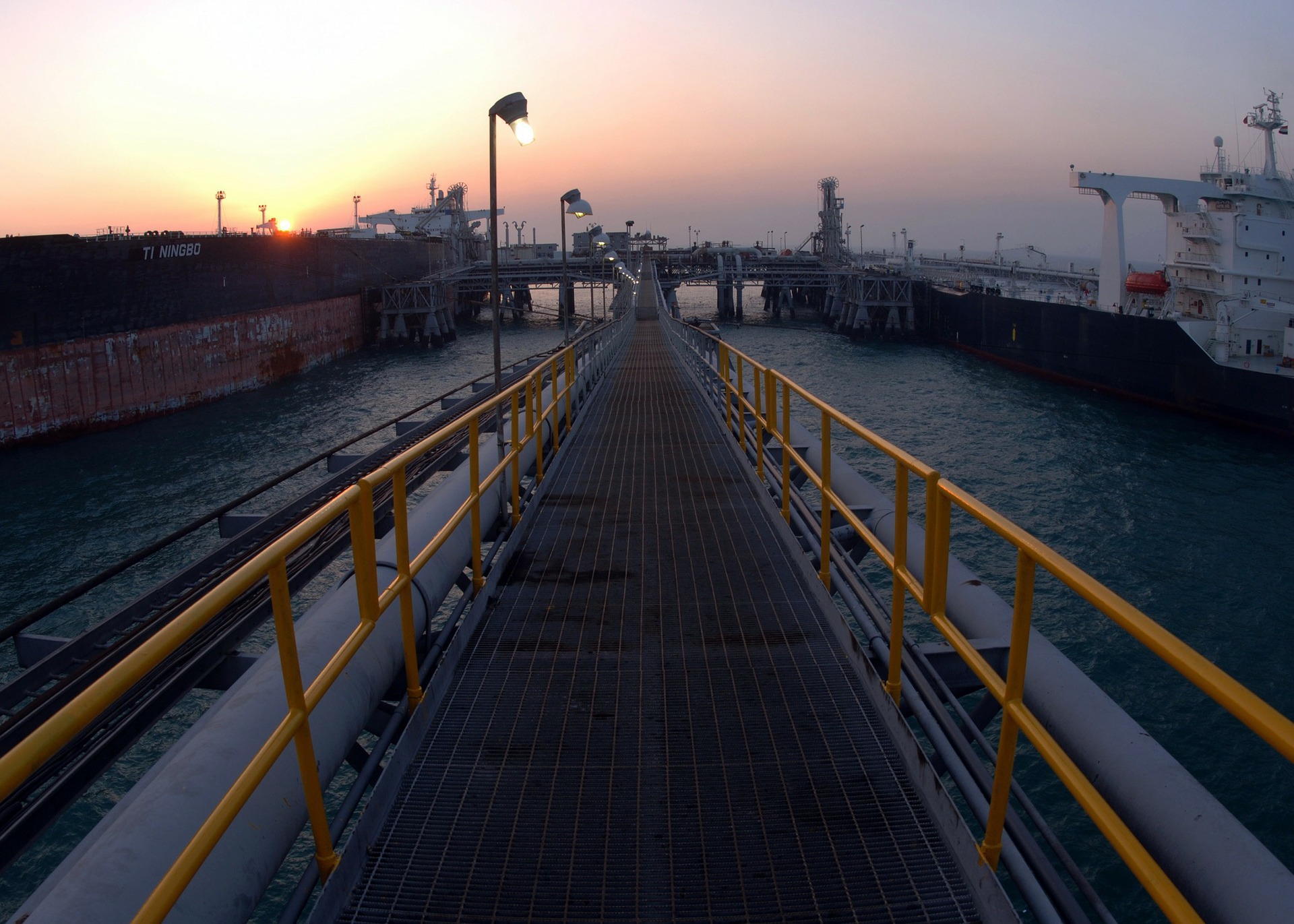 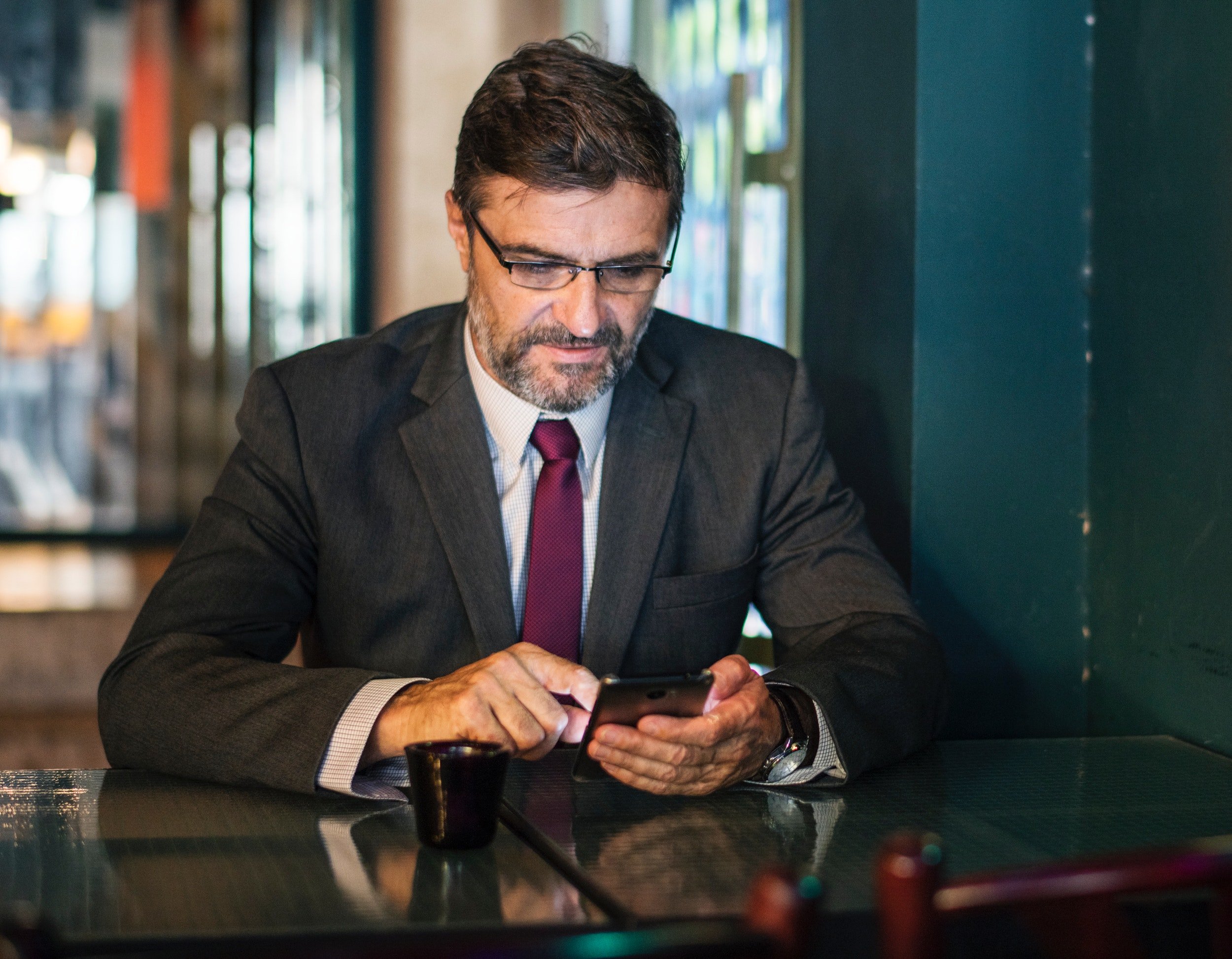 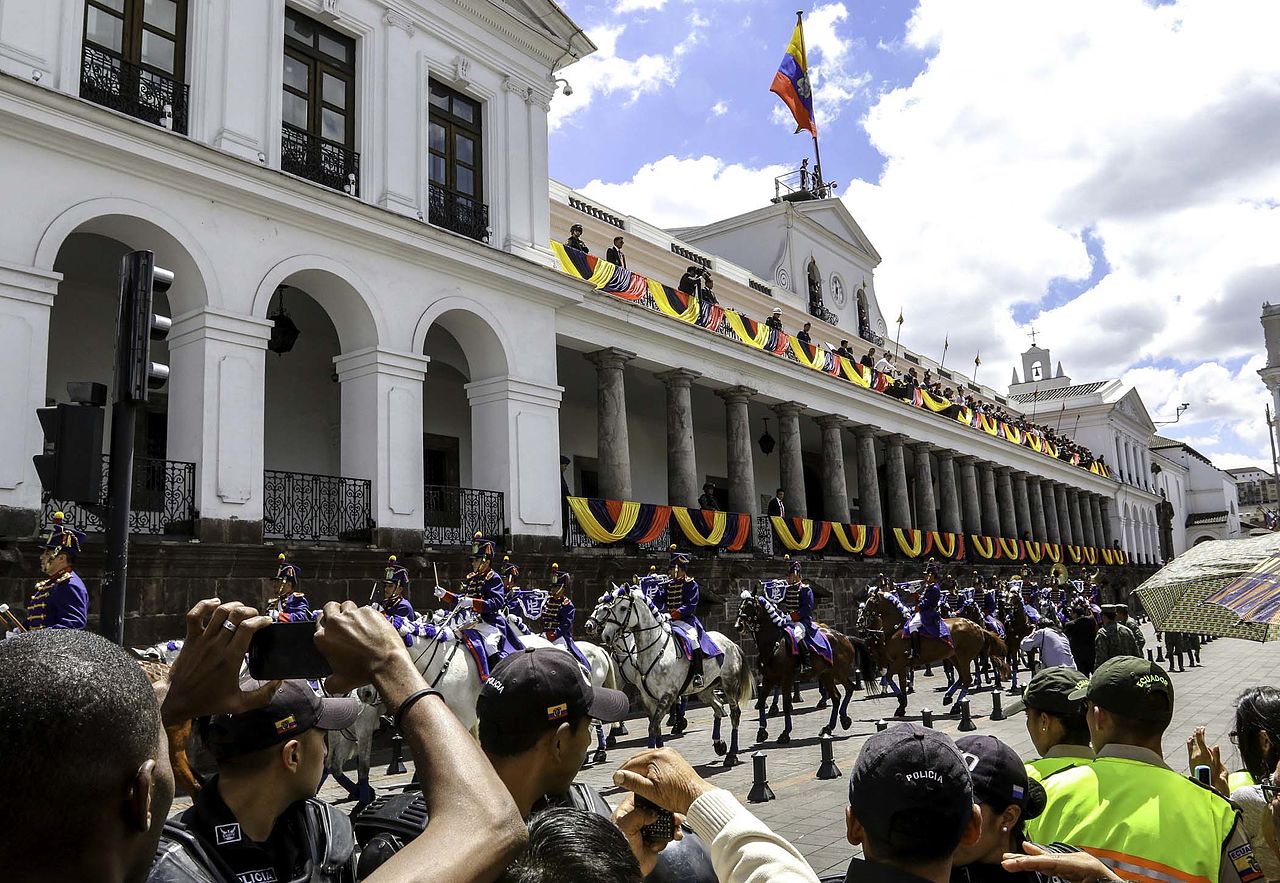 Burning a Source in Quito