To make money, think about the traders who don’t care about money.

The premise was that people’s primary concern was to make money.

That may no longer be true. The market has been fundamentally changed by the rise of commission-free trading and the entry of more than 10 million new accounts since 2020.

Most traders obviously want to make money. However, that may not be their only consideration or even their most important consideration.

Consider what happened with GameStop [GME] in January. As part of a deliberate effort to hurt certain hedge funds, traders bought and held GME even though the market fundamentals didn’t justify the extremely high price. In late January, GME surged to more than $350. Nonetheless, people held on. Some held on even though they knew they were losing money. 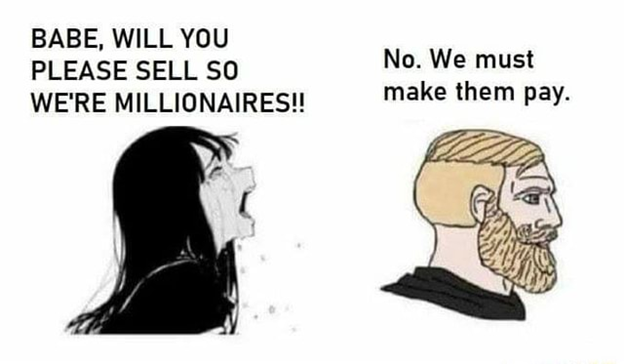 After that, some brokerages, notably Robinhood [HOOD], halted trading, leading to some traders being “trapped” with stocks that they were holding at an artificially high price. The resulting outcry led to a congressional investigation.

And that’s after the bottom fell out from the short squeeze.

In other words, some people are holding not just to make money, but to send a message.

There’s something similar happening with AMC Entertainment [AMC]. In an age when streaming from home is becoming the primary form of entertainment, you wouldn’t expect a movie theater to be a great investment…

But retail investors who think they can beat the “hedgies” are committed to holding.

In fact, I was able to deliver a 458% windfall on AMC in about 30 days in May and June. You can find out more about my approach here.

Winning In The New Economy

Such plays are risky because we aren’t dealing with fundamentals so much as crowd psychology. This gets at one of the fundamental premises of the stock market – really, of capitalism.

“Economic Man” is presumed to always act in his own rational self-interest. Yet Real Man doesn’t define “self-interest” in purely economic terms.

He might want to “send a message.” He might want to invest in a company that is doing poorly simply because he likes the company. He might believe in a “conspiracy theory” that isn’t sustained by mainstream sources of information.

All of these motivations and more are driving an army of mainstream traders. Social media and “influencers” on platforms ranging from Discord to TikTok are creating massive market swings.

This is one of the biggest reasons that Karl Marx was dead wrong about what constitutes “value.” Value is socially determined. It’s about what people want… and what people want is subjective. It’s open to manipulation, error, and emotionalism.

You can call people and their desires irrational or even foolish. Many of them are. Many of those pushing these trades may even be self-interested. Nonetheless, if people act on certain suggestions, it’s going to change stock prices. If people act on flawed information, or even outright myths, it still changes the stock price.

And that stock price, however it arrived at its current level, constitutes an objective truth that we all have to deal with.

Economic models may look orderly, but there’s always an element of chaos…

That means you need to be aware of what’s happening even before the starting bell.

But even short-term moves are often underlaid by larger patterns.

Now, it dropped big time yesterday… but if you had bought at the beginning and are still holding, you’re still sitting on massive unrealized gains.

This even hits companies that may not be directly involved. Consider Phunware [PHUN], a company that was involved with then-President Donald Trump’s 2020 re-election campaign. It was barely clinging to above a dollar a share.

Nonetheless, as “Donald Trump” became the meme on Wall Street, PHUN surged. Again, it fell, but you are still sitting on a massive gain if you were still holding.

Some of President Trump’s followers would always tell doubters to “trust the plan.” Was this “the plan” all along?

Why am I using a Robinhood [HOOD] screen? Because much of this is being driven by retail traders whom I believe would not even be in the market were it not for commission-free trading.

In this case however, I don’t think it’s necessarily about making huge gains or responding quickly to a “meme.” I think that a lot of these traders think investing in a company is the same as investing in Donald Trump himself.

It works the other way too. One major hedge fund trader cost himself millions because he was so fiercely opposed to Donald Trump.

Mr. Weinstein said that “many investors are grappling with hard questions about how to incorporate their values into their work.” He said that selling in this case “was not a close call,” even though, objectively, it cost him money.

“Partisan investing” or “personality” based investing is an inevitable consequence of retail trading.

For example, Paris Hilton recently launched her own Non-Fungible Token collection, with bids on her NFTs surpassing more than one million. Jessica Alba’s The Honest Company [HNST] surged during its IPO, though it has since fallen. Colin Kaepernick backed a SPAC, Mission Advancement [MACC], though it has underwhelmed since it went public. However, if it backs a project that makes a media splash, all that could soon change.

Underlying all of this is the bigger shift of, in Mr. Weinstein’s words, “incorporating values” into investments. This is a trend that is being pushed from the top down via the term “Environmental, Social, Governance (ESG).”

This is a program that is going to be directing trillions of dollars in the years to come… and we’ve got an expert who is tracking this using a multimillion dollar system.

A $40 Trillion Mega-Wave is shifting the global economy…

Changing everything from the clothes we wear to the cars we drive. As a result, it’s recently produced a 500% windfall in only 30 days.

Get the full, inside story by clicking the link right here.

As for myself, I think that the distinction between “the market” and “society” are blurring fast.

People don’t just act on economic motivations. As trading becomes more democratic, more people are going to vote with their dollars. This doesn’t just mean supporting companies or causes they like, but making trades that are designed to challenge the very structure of the system.

There’s also one pattern that I’m seeing repeatedly. When a “meme stock” takes off, it may retreat later… but it usually finds support at a much higher level than where it began. That’s precisely what’s happened with GME and AMC.

It’s a fundamentally new trading environment, and those who want to profit need to change with it.