I’m not prone to road rage, but last week I almost lost it…

It was as if every terrible driver in town had joined me on my trip back home.

People swerved into my lane. They cut me off as I tried to merge. Honestly, I feel lucky to have made it home alive.

But the worst of the lot was some young man in a burgundy Honda Accord. He so ignored the stoplight that I was nearly broadsided in an intersection only a few kilometers from the house.

As a trader, I’m supposed to have my emotions entirely under control.

And I usually do. But I screamed obscenities at Mr. Honda the likes of which I’d rather not repeat in polite company.

Following this near-death encounter, I realized something. Nearly all the near-misses that day resulted from these drivers not paying attention to the road or blatantly ignoring the traffic signals.

When you’re at a four-way stop, and you have the green light, then go.

In my options coaching, I’ve noticed a similar problem with many new traders. They just don’t follow the signals.

I’ve spent years developing my own composite trading indicators and providing these to subscribers. Signals that literally tell you when to get in and out of a trade. It’s why we’re able to bank so many winners like the 56% on NFLX from Oct 22nd that closed the same day.

Just look at the following daily SPY chart that has a couple of my indicators applied. 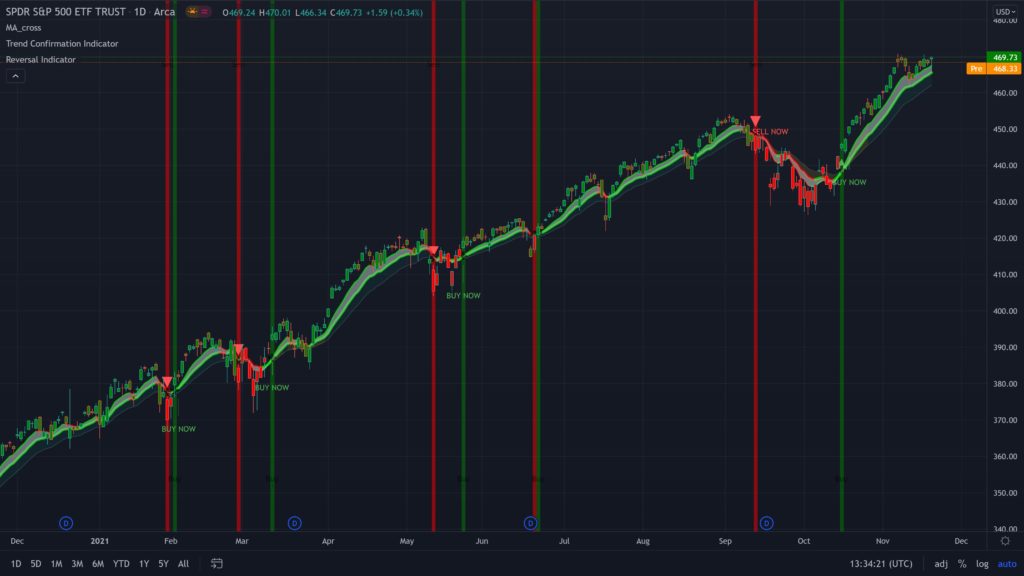 If you’d bought each time, you saw a green column and the not-so-subtle hint of “BUY NOW,” you’d be doing well.

This is why I stress the point that:

If you’re going to rely on a set of signals to guide your trading, then follow them. If you don’t, what value do they have?

When the light turns green, put your foot on the gas.

Could you get t-boned by another driver? Sure. But that’s why you look both ways. It’s for confirmation of the signal.

Most of the false starts would have easily been screened out by my other indicators.

Those that weren’t would have been picked up by waiting for a bullish candle to print the next day. If the trade still went wrong, I would have been out quickly using a mental stop loss of -20 to 25%.

The key is that you have to trust your rules.

Have confidence in your system, and you’ll follow the signals.

If not, you’ll be sitting at green lights wondering why people are honking their horns or barrelling through red lights smashing into other cars.

The only way to build your confidence is to trade.

Whether you’re using real money or testing out a new strategy on paper, pay attention and pull the trigger when it’s time.

If you don’t, you’ll always be late for the party.

You’ll lose out on the most profitable part of the move and be eating everyone else’s crumbs.

Oddly, following robust signals is a problem for many traders, but it is. If you’re going to win, you have to get over the fear of losing.

Nothing says that you have to put on your full position to start.

Add a cheap trade and see what happens.

If it’s working, then scale in slowly at your predefined levels.

A signal is only as good as the person using it, and I have little doubt that there would still be those who lost money on an indicator with a 100% success rate.

Even if the computer calculates the indicator, you have to press the buttons to make the trade…and you’re human.

Fear and greed get the best of all of us, but if we’re going to make money at this, we have to understand that no reward comes without risk.

Get over it and hit the gas pedal.

P.S. For the latest market analysis and hot stocks to watch, sign up for Rogue Investing Daily. Get in on the hot stocks before they run, like the recent 111.85% win on LCID in just under a month. Click here to find out more.