Be careful what you wish for, because you just might get it.

Earlier this week, I wrote about learning to love “meme trading.” I also described the rise of “political traders,” those who make investments because they are trying to make a point, not because they are interested in making money above all other concerns.

Some trades, of course, are motivated by both rage against the current economic order and the desire to profit. This might seem contradictory. It’s not. Making a gain in the current environment seems like revenge.

I don’t endorse this viewpoint. Jealousy is poisonous. Yet we can’t ignore that there’s a lot of that out there. There’s also a lot of recklessness.

With more than 10 million new brokerage accounts opened since 2020, we have first-time investors who are getting their information from social media and “influencers.” There are a lot of wonderful stories about people barely out of school making life-changing wins… but those tend to be the ones you hear about.

There are also a lot of stories about people who chase The Great Gatsby’s green light on the dock, the American Dream, but end up as fodder for somebody else’s fortune. You don’t hear about those.

The cryptocurrency market is probably going to be regulated much more rigorously very soon. There is some evidence to suggest deep seated problems within the very foundation of the market. For now though, what SEC Chair Gary Gensler called the “wild west” remains.

We saw a bit of that last night. If you are a subscriber to Rogue Investing Daily, you were probably wondering why you got an email at 2:07 AM EST instead of at a normal hour.

Winning In The New Economy

Well, the reason was simple. A few days ago, I said investors should consider moving into the meme coin Shiba Inu. This coin is a parody of a parody – dogecoin. 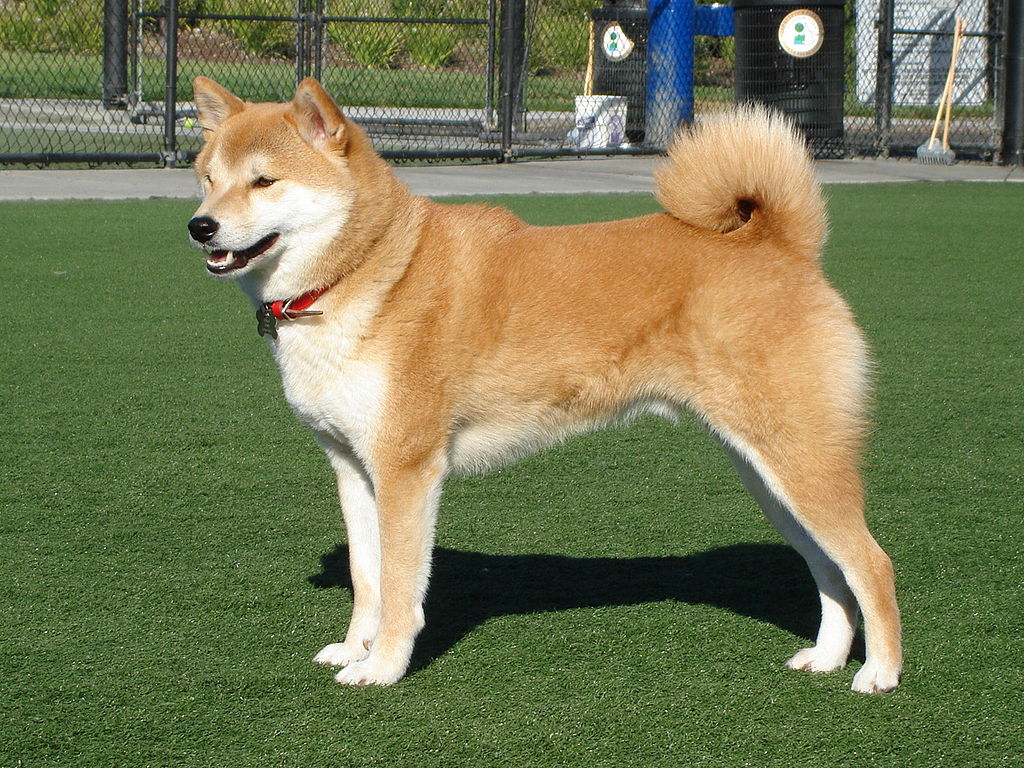 Behold, the Destroyer of Worlds

The coin skyrocketed in value as ordinary people began learning about it and the financial press jumped on board. Of course, as that happened, at the key moment when it was the center of attention, the price started declining.

At the same time, the price of Dogecoin began moving up again. It was a battle of memes. It was also something deeper.

There’s an old saying – “Trade the rumor, sell the news.” When people are really beginning to learn about something for the first time, it’s already too late. Like a general launching a preemptive attack, you want to move just before others do.

Consider what happened when Elon Musk hosted Saturday Night Live. The price of Dogecoin rose significantly before the event. Everyone assumed he would say something about the coin to push the price up during the show. However, the price actually began declining. If you bought during SNL, you were left holding the bag.

Obviously, we are dealing in a marketplace here that has plenty of bad actors – “pump and dump” schemes for coins of little value are rampant. Regulation may curtail some of that. Yet we’re ultimately dealing with something more fundamental, something that applies to almost all assets.

The phases described by this chart seem especially appropriate to cryptocurrency. Something like the Shiba Inu coin (henceforth SHIB) was very fringe for a long time. You couldn’t get it on Coinbase (COIN) and you still can’t on Robinhood (HOOD) despite a petition asking for it. You needed specialized knowledge to even acquire it.

Then it began taking off. “Media attention, enthusiasm, greed, and delusion” were passed in a matter of hours. It’s worth noting that most other cryptocurrency assets were declining at this time. Just as people were talking about the “New Paradigm,” the idea that SHIB would make everyone rich, the bottom fell out. 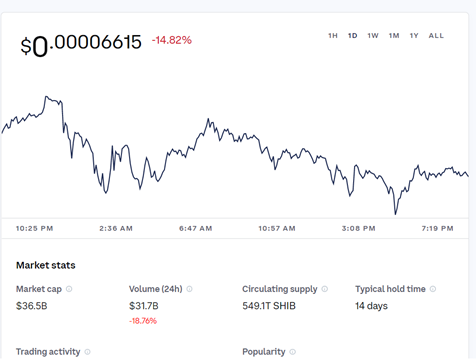 (I sent the email to subscribers at about 2:07 AM saying it was time to consider cashing out.)

Here’s the performance of DOGE during the same time period. 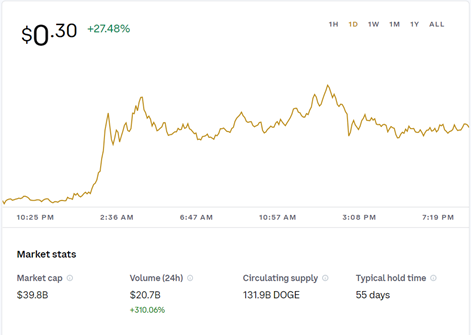 With these kinds of cryptocurrencies, it’s important to be well-informed, mobile, and above all, liquid so you remain ready to act. These “meme coins” are especially volatile. Perhaps some companies will begin accepting them as payment. DOGE reportedly has a couple. Nonetheless, these coins are basically speculative assets and the regulatory environment will change soon. In fact, it needs to.

Though RID readers may have made some short-term profits here, this isn’t the kind of thing you can do unless you are constantly plugged in and ready to trade. You also need to be able to make big moves with relatively small amounts of money. There are trading strategies that allow you to do this, like the one Chris Hood described earlier this week.

Yet even when we are dealing with speculative or fringe assets like this, we see deeper patterns emerging. We see the same bubbles and waves of enthusiasm and panic that set in for many other assets. Here, it just went through the stages much more quickly.

We also see investment looking for more promising targets when one asset declines and another rises. Even talking of meme coins as purely speculative is somewhat misleading. As I’ve said again and again, Marx was wrong because value is socially determined, not simply the product of labor.

Markets follow patterns that are embedded deep into our group psychology, perhaps even into the basic structure of mathematics. Knowing “technicals” and having some basic recognition of these patterns is a key to successful trading. It’s something my colleague and supervisor Corey Snyder excels at.

However, even if you aren’t a quantitative-based trader, you can still see the patterns. On social media, in the press, and even in the way people talk, you can see the way momentum shifts and the value of assets change. The more speculative (and arguably destructive) trading in “meme coins” will be brought to heel soon. Yet what we saw earlier this week was just a more accelerated and extreme version of what happens all the time.

With education and experience, you’ll begin to “sense” these patterns even before you can rationally explain what’s happening. That’s why it’s so important to begin trading, even with small amounts of money or “paper trading” with imaginary money. Nothing beats experience… and nothing beats the feeling of excitement that you get when you know you have caught a wave at the perfect time.

Well, one thing beats it. It’s when you help other people achieve their dreams. In The Great Gatsby, the “green light” is supposed to signify the “unachievable” and “impossible” dream… but here at Rogue, those two words aren’t in our vocabulary.